“Saying no” is one of my favorite pasttimes, as it is for anyone else who feels like they’re actually in control of their life and not just “yes”ing to a bunch of things they don’t want to do, but learning how to say no politely is a great skill to have to make sure you don’t burn bridges or end up in sticky situations.

Just because you need to say no doesn’t mean you need to be rude, and it’s not really a good look when you’re so brutally honest that you just end up being cruel.

Whether you’re trying to politely say no to a wedding invitation or say no to a meet up with friends or say no to someone asking you for a favor, these are some great ways of saying no politely in all situations.

There are also plenty of times when you genuinely do want to do something, but can’t, and in that case you want to make sure it comes across how much you regret having to say no with these gentle ways of saying no.

This is a short and easy one, more appropriate if someone offers you brussel sprouts at dinner but you absolutely hate them.

Just say no, but thank them for offering. It also is a great way of a sales person offers you something you don’t want to turn them down.

Use this when in a shorter social situation, not when turning down an event invitation.

Saying “No, thank you!” when the guy at Subway asks you if you want vinegar on your sub is perfectly fine and acceptable and polite enough.

Saying that to your friend who invited you over for dinner is definitely not the way to go.

Using a phrase like “I’m really sorry” or “I’m so sorry” before your “no” can help make the “no” more gentle and polite, rather than just straight out denying them.

You can also apologize at the end of your no, but it’s usually better to start with it.

3. Thank you so much for thinking of me. Unfortunately, I can’t!

Let’s say someone recommends you for a job that you don’t have the ability to take on at the moment, but you don’t want to burn bridges.

In this case, you can thank someone for thinking of you before denying them and saying you can’t or won’t.

It acknowledges that that person’s thoughts went to you and not someone else, and that you do appreciate that personalized attention and thought.

It also usually is a compliment when someone asks you to do something (unless they’re a toxic friend or boss taking advantage of you, but that’s another story).

This is a great way to say no while being polite but showing them that you appreciate the compliment of being asked.

4. Unfortunately I won’t be able to, but I hope you find someone!

You can always offer up some positive vibes for them after you say no, so go ahead and tell them that you won’t be able to (using the word “unfortunately” helps soften the “no” even more and express regret”) and then offer up some sort of positivity.

You could say that you hope they find someone, that you hope they have an amazing time, or that you’ll be thinking of them, but just finish the sentiment on placing the positivity on them and distracting from the fact that you just said no.

5. Unfortunately I’m going to have to pass.

This is a more professional kind of “no” that uses the classic “unfortunately,” so you act as if you’re expressing regret that you’re saying no, and also the phrase “have to pass.”

“Have to pass” is a bit ambiguous, but essential tries to get across that you don’t have a choice but to pass/say no, even if that’s not strictly the truth.

It could be something like when you say no to going out to a group of coworkers going to a restaurant that doesn’t offer anything within your diet, and you do “have to pass” because the other option would be to eat something that makes you sick or bring your own food which just feels weird.

“Sadly” is another great polite no word that helps the other person feel like you feel sad about saying no.

Again, thank them for offering or asking you, and then let them know it won’t work out for you and you’re sad about that fact.

7. Give a White Lie Excuse

This is going to be slightly controversial, but honestly sometimes the best way to give a polite no is a simple white lie excuse.

This is an excuse that says that you’re double booked when you’re not or you’re feeling unwell when you aren’t.

Don’t lie about like, going to your uncle’s funeral or the fact that you just got diagnosed with some deadly disease.

The reason this is often easier for everyone than the truth comes into play when the truth is ruder than fiction.

If you don’t want to go to your cousin’s baby shower because she’s still best friends with your toxic ex, who is going to be there, and you’re not emotionally ready for it, then simply giving a white lie excuse is way nicer than getting into the drama of the real reason.

8. I would have loved to, but unfortunately I can’t.

If you can’t or don’t want to go to something or do something for someone, it can be a nicer “no” by offering up that you really did want to or would have loved to.

Don’t say this if there’s a chance they’ll ask again, but if it’s a one time thing, like being invited to a wedding, then saying you would have loved to go is a nicer way to make the other person feel special even if you can’t show up in person.

In fact, this is one of the best ways to politely say no, because you’re both expressing that you really wanted to while also being firm that you can’t.

The other person may feel disappointed, but mostly will remember from the interaction that you wish you had been able to, which almost counts for as much as doing something.

This is a fun and cute way to let someone know that you’re double booked.

By wishing there were two of you, you’re saying that you wish you could be in two places at once, but have other obligations.

This is a great one to use when you actually do want to do the other thing you’re already schedule to do, like if you’re invited to two weddings on the same day and already said yes to one.

You don’t want to sound like you regret having to go to the other event, but equally you want the people inviting you to their wedding to feel as though you think theirs is important as well.

Decline, and then say you wish there were two of you, and now no one’s feelings are hurt!

10. Unfortunately I can’t take on anything else right now, but thank you!

If you’re saying no in a work context (or if someone is asking you to do a favor for them), letting know that you can’t take on anything else is a nice way to express that you simply have no room in the calendar for their project.

Add in a softener like “unfortunately” or “sadly” to it, and end by thanking them for offering or coming to you (if it is for work and not for a favor).

This is honestly a great way to say no to clients who you don’t want to work with, because no one can actually demand your work schedule.

This way, it doesn’t come across as you don’t want to work with them, but that you don’t have the capacity to work with anyone (even if that’s not true).

11. Sadly I’ve already agreed to something else!

If you’re using the “double booked” excuse, you can simply say that you’ve “already agreed” to something or someone else.

This makes it clear that you’re saying no to the person who asked second because you have to keep to your word for the first event, and most people understand that.

Add in a “sadly” or “unfortunately” and you’re golden.

If you have to say no, but would really like to be included in something the next time or asked again, use this as a nice way to end your “no” so they don’t think that you’re forever not interested.

This is great when friends ask you to do something and you don’t want to for some reason or are already booked, so they don’t stop inviting you just because you said no this once.

This also relates to things like work and freelance clients, or any other invitation where the occasion may happen again.

If you want to keep it more informal and casual, ditch words like “unfortunately” or “sadly” and use phrases like “oh no!” and “such a shame” when declining something.

These are just more conversational ways to add to your “no” to express your regret from having to say no, and is a nice way to talk to friends.

While the word “sadly” feels a bit more professional and detached, the phrase “it makes me so sad” is a nice way of expressing the same sentiment to a close friend or family member.

For instance, if you have to say no to going to a friend’s baby shower because you won’t be able to make the 5 hour drive, but are genuinely sad to not be able to go, let them know that it makes you so sad to say no.

It just sounds a lot more personal than “sadly, no.”

15. I’m so honored/flattered, but unfortunately I can’t.

If what you’re declining is actually something that you were flattered or honored to be asked about, make sure you tell them that!

For instance, if someone at work is asking you to go to an awards ceremony to accept an award on behalf of the company and you can’t go, make sure they know that you’re honored they even asked.

This also works well with invitations like wedding invitations, saying that you were so honored to be invited (as you recognize it’s a big deal in a couple’s life with a limited guest list) and are sad to have to say no.

It’s a way of indirectly thanking someone for asking you, while still saying no. 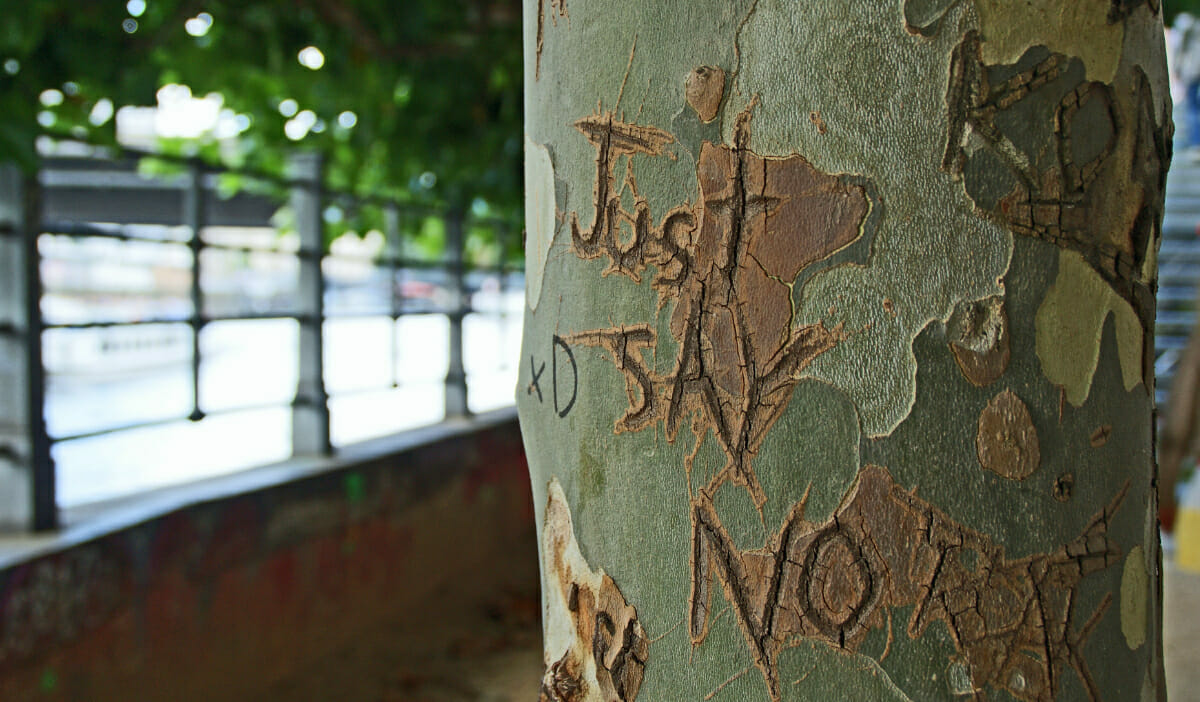