These are all examples of toxic friends, and in this guide on how to deal with toxic friends, we’re going to go over some of the main techniques you can use to both handle them in your life and, well, get them out of it.

Because that’s the thing, toxic friendships are just that: toxic.

And the word “toxic” means you probably shouldn’t be going out of your way to keep them around.

This is easier said than done, though, and sometimes it might be a family friend or just a more complicated situation that can’t be solved in a blanket “cut them off” statement, so here are some ways to deal with toxic friendships.

Setting boundaries is one of the most important parts of normal relationships, but particulary in toxic friendships.

Unfortunately, your toxic friend isn’t about to be the one who sets the boundary so it has to be you who makes sure that you keep your boundaries up.

Having these emotional or practical lines that you won’t let someone cross is an important way of maintaining your autonomy and not becoming codependent or bending too heavily to the wills of others.

Boundaries in a toxic friendship could be things like you don’t answer the phone after a certain time of the day.

It could be something like you excuse yourself from the conversation every time they start gossiping about your other best friend.

Whatever it is, read up on how to set boundaries in friendships and relationships so you can make sure that, as much as possible, it isn’t an unbalanced friendship.

2. Call Them Out on Their Behavior in the Moment

Whether a friend is making you feel self-conscious because they keep making jokes about your shirt or they’re constantly complaining about everything, take the opportunity in the moment to call them out on it.

Sometimes, it’s easy for a toxic friend to gaslight us into feeling like maybe we’re the crazy or toxic ones, but if you continually reference their behavior when it happens, it’s harder for them to wiggle out of.

For instance, if a friend is making disparaging comments about your clothes that they think are “funny jokes,” stand up for yourself in that moment and say, “Hey, it actually really hurts my feelings when you say things like that even if you mean it as a joke. I have friends so we can build each other up, not tear each other down, and I feel that’s what your comment just now did.”

It takes guts to do this, but is one of the best ways to lead to change in your own perception of the relationship, if nothing else, because you’ll soon be aware of just how often your friends acts in a toxic way if you’re always bringing up the behavior when it happens rather than letting it build up.

It can be hard with long-term friends to immediately cut them out of your lives, and in this case you can try the approach of distancing yourself slowly. You’ll want to start by just not being the one to initiative conversations or plans, and when they do reach out, you don’t have to respond right away or agree to meet up with them constantly.

They may get the hint and go on to other friendships, but even if the process takes awhile, you’ll feel more confident and secure in yourself the more you detach from them.

It’s not your fault that you have toxic friends, but it is your responsibility to handle the situation from your end in a way that preserves your own mental health because they definitely aren’t looking out for you.

Therapy can be a fantastic way to navigate the waters of a toxic friendship and learn how to deal with toxic friends and toxic people in general. A lot of people think therapy is just for people with severe mental health issues, but it’s absolutely not! It’s for everyone!

Having a third party sit down with you and reflect back what you’re saying to them about the friendship can make you have so many realizations and “duh” moments that would have been impossible to have on your own.

It can also act sort of like a coach in your corner, cheering you on as you detach yourself from these people, and you’ll learn a lot about yourself along the way.

5. Boost Your Own Self-Esteem Away from Them

Part of learning how to deal with toxic friends is really figuring out how to retain your own sense of self-worth and not being dragged down by them.

This takes a lot of energy and purposeful work, but it’s totally possible.

Get involved in hobbies, sports, or clubs that don’t involve them and surround yourself with new people, or simply focus on just yourself by taking yourself on fun vacations or outings, buying yourself a new outfit, or starting up a practice like mindfulness or meditation to build your emotionally stability.

You are worthy and you are wonderful and you shouldn’t ever let a toxic friend get into your head to the point where you think you aren’t.

Focus on your own self-esteem and getting that validation from inside yourself, rather than other people, and you’ll be on your way to building up an emotional barrier of sorts to letting them get to you.

6. Don’t Engage or Get Involved

Sometimes, the toxic nature of a friendship will include them gossiping or wanting to drag you into their antics or their drama.

There are friends in our life that it can be safe to do a little bit of “venting” with about other people or situations in your life, but a toxic friend is not one of them!

You can’t trust them not to involve you in their drama or turn around and tell other people what you’ve been saying, so the name of the game for you is to never get involved with their toxicity or behaviors.

You can listen, but never respond affirmatively and always give non-committal answers like, “Wow, I’m sorry to hear you feel that way about her!” rather than saying, “Yeah, she can be a little bit selfish!” or telling her your own thoughts.

This also goes for if you have a toxic friend group who always have some sort of drama.

Don’t take sides, switch the subject as early as possible, and stay out of it.

7. Understand Why They’re Being Toxic

People are who they are through a series of life events, attitudes, and other environmental as well as genetic factors that combine to make them behave the way they’re behaving.

The most important thing you can do is try to take a step back and understand that them being toxic or disparaging or just downright mean has more to do with them than it does with you.

Maybe their parents treated them that way growing up.

Maybe getting involved in drama and gossip is their way of making themselves feel excited in their otherwise boring life.

Maybe they just never developed the capacity to have a normal, balanced relationship or never saw one in real life.

You can’t always know the exact reason why someone is behaving the way they are, but you can try and do a little bit of research into human psychology and why people act like that to try and understand them and know that it isn’t about you.

8. Change How You View the Friendship

A toxic friendship can only affect you to the extent that you consider that person a “friend.”

There are plenty of toxic people that surround us, but we don’t notice or aren’t impacted by them because it doesn’t really matter if the person at the checkout at the grocery store acts like that – they’re just a stranger that we’ll never see again.

Instead of viewing this person as a friend, view them as an acquaintance that you have to see time to time at various events, but not someone in your close social circle.

Don’t put so much emphasis on your friendship, and their toxic actions will start to have less of an impact on you.

You don’t necessarily have to tell them this to your face, but if you can recategorize them in your head and push them further emotionally, outside of your life, they can be much easier to deal with.

For instance, if they live nearby, turn them in your mind from a friend to a neighbor.

Or if you work together, a friend to a colleague. Or if you are friends from the past, view your relationship as “we used to be friends in college,” rather than “we’re friends now.”

A friend is someone who supports you, who loves you for you, and who makes you feel great about yourself, otherwise why would you want to spend time with them?

If they don’t qualify for that label in your head, change the label.

9. Cut Them Off Completely

The big kahuna, the best thing to do when it comes to a toxic friendship is to cut them out of your life completely.

No matter how many steps you put into place to try and protect yourself from them, toxicity just has a way of seeping into your life unless you go cold turkey.

This can be incredibly difficult if they are a long-term friend, and so it might be that you start off by distancing yourself slowly and then, over time, decrease that bond until it’s easier to block them and cut them off completely.

However, if they are really making your life miserable, you are well within your right to initiate a “friendship break up” if someone is impacting you so negatively.

Treat it like you would any other break up and let them know that you don’t feel you can be friends anymore for XYZ reason and that you wish them well, but to please not contact you.

It seems extreme, but because of the nature of a toxic person and how much they want to latch on to people, it might be what it takes to finally find your freedom.

You may have to continually cut them off, if they keep trying to get in touch, but block them from your phone or social media if you have to and continually refuse to engage in further conversation after the initial break up and just keep repeating that you don’t feel the friendship is in your best interest and you wish them well.

Eventually, they’ll move on to someone else and you’ll ultimately feel happier knowing you had the guts to stand up for yourself and remove that bad behavior and attitude from your life. 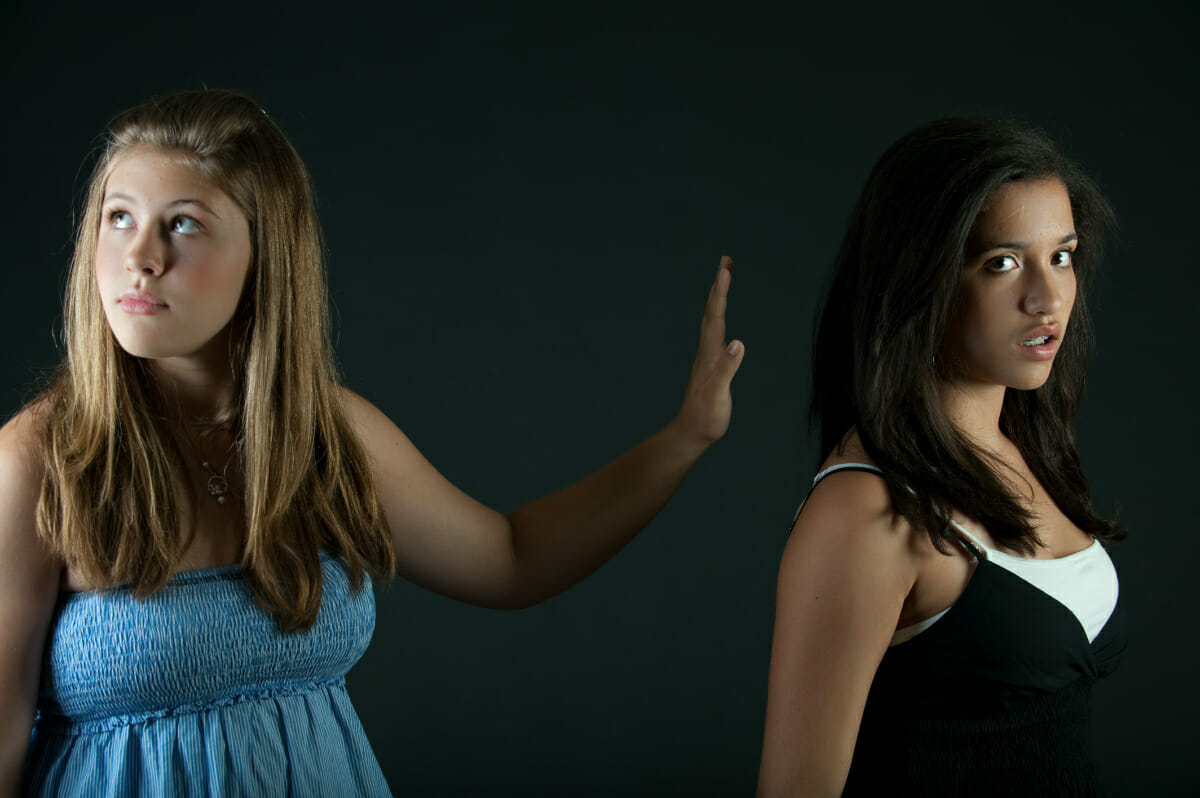